If everything goes as planned, Spring 2016 will see the release of The Nightmare Lullaby, the second of my “Magic Music” novels. As one can tell from the title, nightmares play a significant role, so it shouldn’t be too surprising that the first of the four main point-of-view characters the reader meets is Pierpon, an imp whose responsibility (until recently, that is) has been the crafting of nightmares. He’s proud of his job, believing that a good nightmare can rouse the conscience of an erring human. Unfortunately, after his dark visions failed to frighten the fearless young sorcerer-apprentice Valeraine, he was kicked out of the dream realm, given corporeal form, and bound to Valeraine until he can find a way to scare her. It’s in this state that we meet him.

The drawing of Pierpon is done from a description I based on an earlier draft, in which he was more surly and out-of-temper than he ended up being in the final version. Still, the black curls, the big dark eyes, and the porcupine mustache are on-the-nose accurate. Many thanks to Kaysha Siemens.

The following excerpt from Chapter 1 shows the result of Pierpon’s ill-advised attempt to run away:

“Pain seared through Pierpon, turning his breath into daggers of ice in his chest. His eyelids froze shut. In his mind’s eye he saw the winter-devil of so many nightmares, its gaping mouth sending forth a cloud of bitter breath to sting him. Then a balm swept over him. A hand, he realized after a moment, warm as a hearth-fire, lifted him free of the smothering cold.

Nearby a drunkard swung from a bell-pull, creating a head-pounding clamor.

Water dripped from Pierpon’s eyes. Through the blur he could discern the outlines of a massive woman in a long black cloak. As his vision cleared he found green eyes staring down with cat-like curiosity. A tremble started in his toes. In his exile he’d grown used to the idea that only magicians, with their supernatural sight, could see him. This creature was either a sorcerer or something other than human. Perhaps both.

Clad in the simple style of a traveler, she wore black boots and trousers and a high-collared indigo tunic under the cloak. But it took him two good blinks and a rub at his eyes to make out anything like a face, near-invisible as it seemed against the snow. Her skin and her long, tangled hair were white – not pale, but the absolute white of an ivory statue given life by a demigod.

She had a clear brow, a sharp, slender nose, upswept cheek-bones, a delicate mouth, pointed chin, and slightly pointed ears, a little like his own. Her elfin face seemed out of tune with her gigantic stature. From his vantage point of four inches, ordinary humans looked enormous, but he took the measure of the folded legs, along with the length from her waist to her head. She was an authentic giant, at least eight feet tall. Such towering brutes lumbered through slumberers’ nightmares, swinging their clubs and threatening to roast any flesh-bearing thing within reach. He rolled in her palm, glancing about for an escape path.

She did not look hungry. A muted glow in her eyes suggested distraction. Her head tilted toward that ringing row nearby.

She set him down upon her leg and scooped up a handful of snow. As she breathed upon it it dissolved into water. With her free hand she helped him to sit and brought the water to him. He sniffed at it. ‘It’ll warm my insides, it will,’ he remarked with a pat of his ribs. 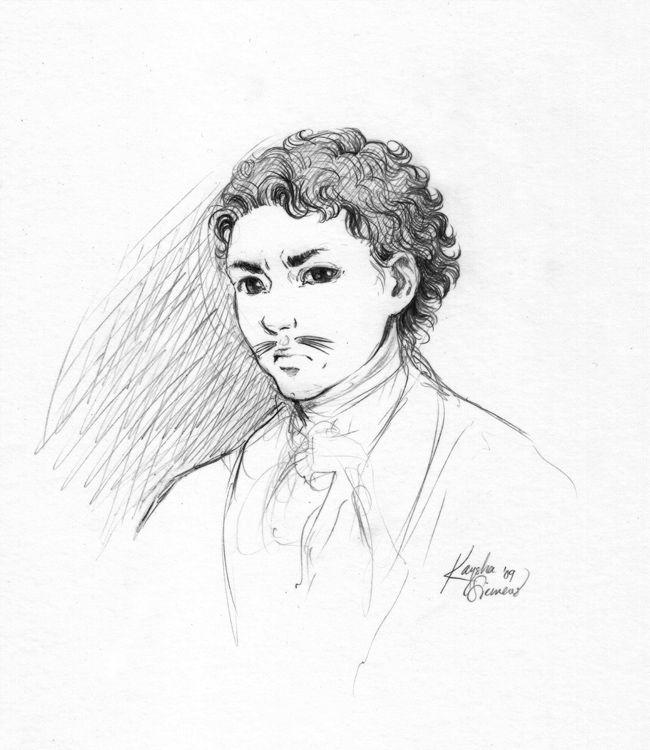 ‘Much gratitude, ma’am.’ He lapped up the water from her palm, and by the time he’d drunk it dry, the last remnants of the killing cold had left him.

With a self-conscious twinge he attempted to smooth the wrinkles from his damp gray smock and breeches. He bowed from his waist. ‘Master Pierpon of Jicket-Castle, at your service, madam.’

The giant put a finger to her smiling lips and shook her head. He read her gesture easily enough. Pray keep quiet for now. He followed her gaze to a ledge a little above them, where sat a wagon with a shining silver roof. The wagon’s sides quivered whenever the racket swelled. Something inside it was making this noise.

The faces of a listening crowd in the valley beneath echoed the giant’s rapturous look, though perhaps less intense. Among them he spied a familiar lace-trimmed straw bonnet and under it honey-gold ringlets, a dimpled face, and a bell-skirted gown of bright coral taffeta standing out amidst the dark woolen coats and scarves and caps like a pink rosebud sprouting from a patch of brown leaves. Like the others, Valeraine stood stock still, attention riveted to the racket-making wagon. What did she and the rest hear in it that he could not? At least, distracted by the clamor, she did not miss him, and would never dream he’d managed to slip out of her basket hours ago.

The row faded to silence. Pierpon’s rescuer gazed at him with friendly eyes. A soft voice sounded in his ear. ‘Pier-pon.’ “