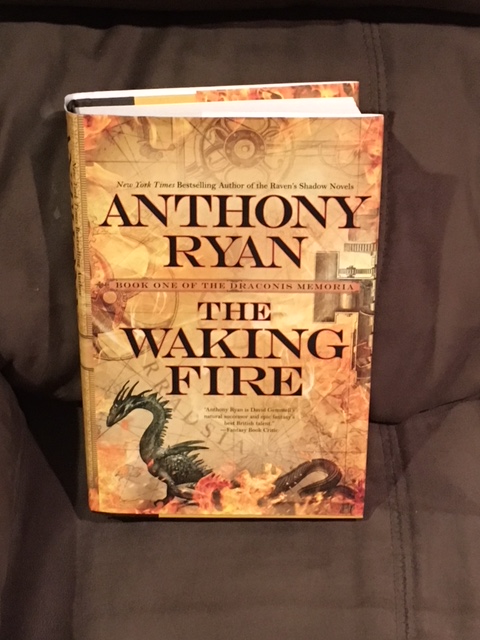 Ryan is a rising star in fantasy; praise blurbs on the cover of this opening volume of the Draconis Memoria series call him the heir-apparent of the late David Gemmell. Though the popular Raven’s Shadow trilogy came before it, this is my first experience with his work. I was drawn to it when several Goodreads reviewers named the novel’s female lead, Lizanne Lethridge, as their favorite character. They described her as a “female James Bond,” so naturally I had to make her acquaintance. As far as she was concerned, the book didn’t disappoint.

The story concerns the Ironship Trading Company, a kind of “econo-mocracy” in which sailing ships have names like Viable Opportunity. Trouble is brewing between this nation and its neighbor, an Empire keen on doing what Empires generally do, that is, add nations to its ranks. Its best line of defense are the “blood-blessed,” people who acquire special powers by drinking the blood of the drakes (supposedly non-sentient dragons) that are hunted and harvested. Ryan presents us with three point-of-view characters: spy Lizanne, street tough Clay, and steady, practical sailor Hilemore, the only one of the three who isn’t blood-blessed. Each POV sequence has its own distinct feel, with Lizanne in a drama of political intrigue, Clay in a trek through the jungle, and Hilemore in a seafaring adventure involving pirates and betrayal. At the very end, the plotlines intersect.

Put simply, The Waking Fire is a lot of fun. The prose is brisk and solid. The action rarely lets up. The figure of “the White,” a draconic Moby Dick both desired and feared, and as the threat from abroad escalates, our protagonists are faced with a possibility that could turn their society upside down: the drakes may not be as non-sentient as originally thought, and they just might be out for revenge. Even while we hope they’ll succeed in protecting themselves and those closest to them, it’s hard not to think that revenge is a little bit justified.

The weakest point is Hilemore’s storyline. In and of itself, it’s actually quite interesting, as our straight-arrow “normal” hero must form an alliance with a pirate queen who’s one of his country’s Most Wanted. But while Lizanne and Clay interact telepathically at regular intervals as they move through their separate plot threads, Hilemore is on his own, and no sooner do we start to care about him and the fearless Zenida Okanas than they disappear from the book and remain out of sight throughout the exciting last third. It’s as if Ryan takes the trouble to develop Hilemore and his situation, only to decide he doesn’t really know what to do with him. What role he’ll play in the next book, we can’t be sure.

But as you might expect, Lizanne makes the book for me. The moment we meet her, we learn she isn’t afraid to get her hands dirty in the service of her government, but there are certain lines she won’t cross; when she’s ordered to kill Tekela, a spoiled-rotten daughter of privilege who has seen too much, she refuses, instead becoming a mentor to the girl, who improves measurably under her guidance. When her own mentor turns out to be a duplicitous double agent and meets her end between the jaws of a drake, Lizanne steps up and takes charge of the defense of her city, and proves an awesomely competent authority figure. More active than acted upon, adept at thinking on her feet, she’s a satisfying heroine to read about, and I look forward to seeing how she’ll handle the next crisis she has to face.