Spoiler Alert as per usual

Children of Blood and Bone 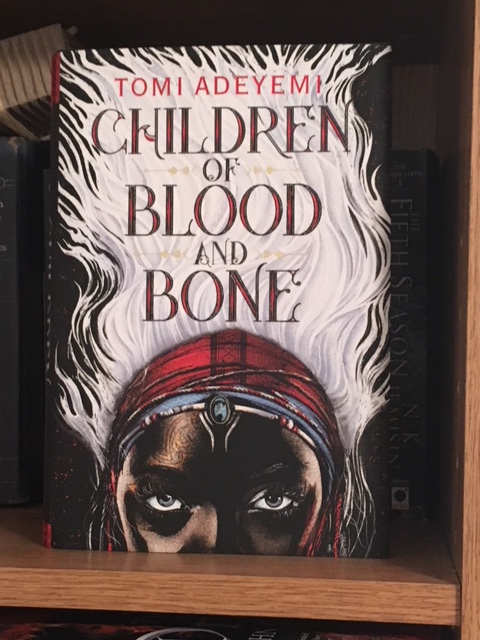 In the second-world kingdom of Orisha, magic has been brutally suppressed. Its king, Saran, lives in perpetual fear that it will rise again, and he persecutes all those who would have potential to practice it — diviners, as they’re generally called, or “maggots,” as bigots call them, distinguishable from ordinary people by their white hair. He has found a scroll that may hold the power to bring back magic, but he has to conduct a test to see what it can do. To that end, he orders his daughter’s white-haired maidservant/companion, Binta, brought to him under guard. Once she’s served her purpose, he kills her without hesitation. She’s collateral damage, and the fact that she’s very dear to his daughter, Amari, means nothing to him. She’s only a “maggot,” after all.

This is what evil looks like in Tomi Adeyemi’s Children of Blood and Bone — raging hatred borne of fear, an “us” vs. “them” antagonism that tags “them” as subhuman. The central protagonist is Zelie, a diviner who remembers seeing her mother slaughtered by the king’s soldiers, and the memory nourishes her own rage. Thus hatred begets itself.

But hope is not lost. The princess Amari, broken-hearted by Binta’s murder, steals the scroll from her father and flees the palace. She and the fierce, bitter Zelie forge a tenuous alliance and embark on a journey to resurrect magic and overthrow the king. They’re pursued by the prince, Inan, his father’s favorite and quite the slave to his father’s good opinion, determined to retrieve the scroll, despite being a secret diviner himself.

Of the three main characters, Zelie is the easiest sell for me, a tough, outspoken risk-taker whom we first meet at a fighting lesson. When she learns of the possibility that magic might be restored to her country, she leads the leads the charge in that direction; here we have a flawed but on-the-whole good character who actively seeks to become empowered rather than feeling frightened by the prospect and wishing she were normal. At the same time, she recognizes the dangers inherent in magical power. She knows that she and her fellow maji must not become the very thing their persecutors fear.

While I expected I would like Zelie and was not disappointed, Amari surprised me. In the course of my reading I lost patience with her more than once, but having finished the book I can appreciate her as the one whose rebellious action sets the whole plot in motion and who does the most growing throughout the story. She engages my sympathy as someone who, at the book’s outset, loses the only person who has ever shown her kindness or love. She’s a naturally loving person who wants to be loved and valued in turn. Thankfully she finds Zelie and her brother Tzain, and earns their affection and respect. The friendship that grows between Zelie and Amari is the book’s most satisfying relationship.

What I disliked about the book can be summed up in a single word: Inan. His situation as someone who loathes and fears magic despite (or perhaps because of) his own powers is an interesting one. He seeks to destroy that part of himself that would divide him from his father and his people, and as such he could have made a compelling villain, the kind you can’t help admiring even while you root for him to fail. Unfortunately, what we end up getting is a drawn-out bad boy/good girl romance between him and Zelie. If at times it seems like it just might work, his weather-vane loyalties — and the way he falls for his father’s mind tricks every single time, even after he’s seen the man torture the girl he supposedly loves — make him the worst love interest imaginable. His act near the end of the book is so clearly a deal-breaker that I found myself frustrated at the amount of page time devoted to this ill-advised relationship.

All the same, I liked the book far more than I disliked it. It sticks its landing, letting the readers see both Zelie and Amari at their most powerful at the climax, and thus making us anxious to learn where they will both go from here. I’m already impatient for the next book in the series.