The Queen of Blood 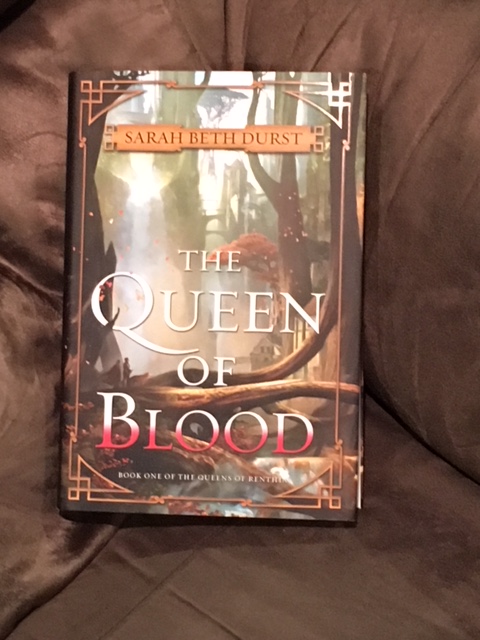 I’d been told by those I trust that Sarah Beth Durst’s high fantasy novel about a realm plagued by malevolent spirits only a Queen can control was good. If I had imagined how good, I might have read it much sooner.

Or maybe not. With all the new books that come to my attention on a monthly basis, I can’t be sure. Suffice it to say that The Queen of Blood was exactly the book I needed to read at the moment I was reading it, a moment when I was feeling even more than usually disheartened by the ongoing flow of “Me, Too” stories coming out of creative communities. Hearing about so many women victimized by powerful men in Hollywood and elsewhere, I needed (and continue to need) stories about women who claim power for themselves and don’t have to smash their moral compass against a rock in order to do so. I couldn’t help but get a thrill from seeing Durst’s hero, Daleina, forge forward and refuse to listen to anyone who tries to tell her “no” — including herself.

Through Daleina, Durst plays with the fantasy genre’s traditional trope of the Chosen One, the protagonist from humble beginnings appointed by Destiny to save the kingdom and take the throne. Guided by some unseen hand of Fate, the Chosen One magically overcomes any obstacle in his (it’s usually “his”) path. He’s meant to be King because Destiny says so, though very often we’re not sure why. The triumph of the naive Everyman over and ahead of those outwardly more suited to success has a certain appeal, and Durst manages to keep what works about the trope while subverting its problems.

Like most Chosen Ones, Daleina is the one you wouldn’t look at. She does have a gift for controlling spirits, but her gift is much less pronounced, less remarkable, than the other girls training along with her for a chance to become the next Queen. Others are more obviously up to the task. But when Daleina does win the throne, it isn’t thanks to the hand of Destiny showing itself by the sudden appearance of a surprising ability; if you’re waiting for her to miraculously become the Best At Everything, you will wait in vain. Instead, she succeeds because she knows her weaknesses and is determined to get better. She takes responsibility and pours every ounce of effort into developing her skills. The keys to her rise are not inborn talents but determination, imagination, and resourcefulness. Many of the short-sighted people in her orbit actually look on her hard work as a weakness. But Ven the legendary Champion sees it for the virtue it is, and he takes her under his wing to train her to be the next Queen.

The idea of training to be Queen is another thing I love about the book. In this world, the royal title is not inherited and passed on through a bloodline. Rather, it is earned. The girl who proves herself the most adept at thwarting the spirits’ murderous impulses becomes Queen. Daleina works to achieve the title not so much to win personal glory as to keep the country safe from the tragedy her home village suffered when spirits raged out of control. Her concerns aren’t limited to the well-being of family and/or a few close friends. She thinks bigger.

Also noteworthy is that only girls and women can harness the power to control spirits, and therefore only a woman can rule. This might seem like the seed for a knock-down drag-out battle of the sexes, with men fighting to claim power and women determined to keep them in their place. Yet to my immense relief, nothing like this happens! We may seen tension between individual characters, but gender-based hostility is all but unknown. All walks of society and roles other than Queen are open to all genders. The men accept the authority of a Queen rather than feeling emasculated by it, and we meet men and women who treat each other with respect and forge solid friendships.

The Queen of Blood is not, in an obvious sense, a feel-good book; look at the title, after all. The threat of violence is everywhere, in the very air and wood and water, and the novel includes many horrifying scenes of nature turning against humankind. Characters die, and many of them are people we like. The country Daleina earns the right to rule has been badly shaken, thanks to the hubris of the previous ruler, and she must take charge of rebuilding even as she mourns the loss of so many friends. Yet still, the book affirms hopeful truths we need to hear in these frustrating times. Women can claim power and lead well. Men and women can support and strengthen each other. We just need to make up our minds to do so.

A big Thank You to Durst for giving us this book.