The most exciting thing that happened to me at this year’s DragonCon was seeing my new audio playscript, “The Dead-Watcher,” performed by the Atlanta Radio Theatre Company, as part of a triple bill with an episode of “Mercury: A Broadcast of Hope” and Elisabeth Allen’s sci-fi drama “A.L.I.C.E.” Sadly, I don’t have many photos to share of this event, but my wonderful husband did snap this picture on that momentous Friday night, with me and the director of my piece, Robert Drake: 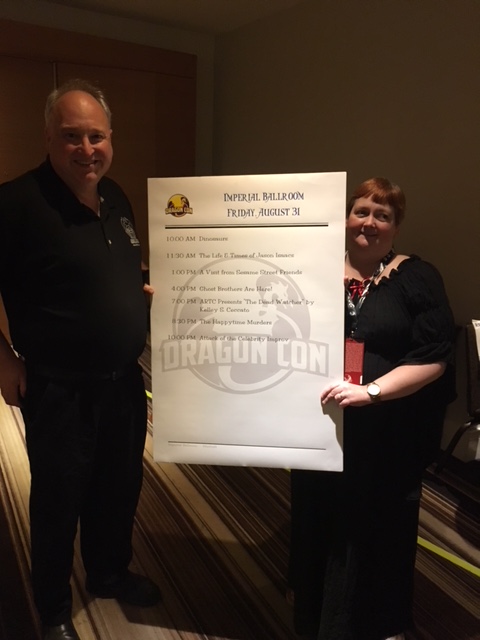 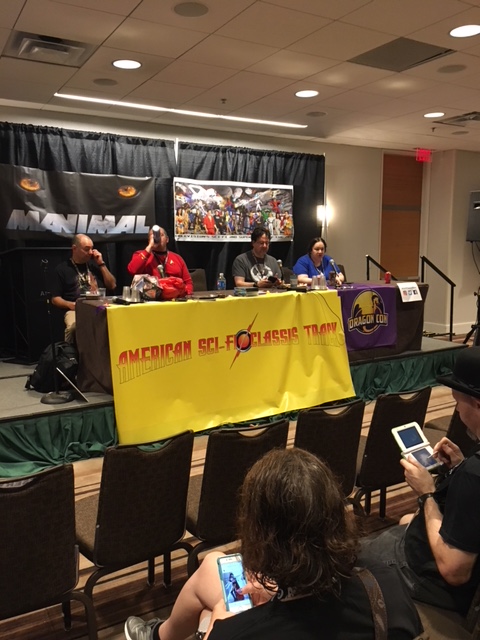 There’s something special about sitting in a room full of enthusiastic adults enjoying a sing-along of “I’m Just a Bill” and “Conjunction Junction.” Songs like this can stay in one’s head for hours. The one I couldn’t stop singing to myself under my breath, which I found out is a lot of other people’s favorite as well, is this:

Some of our audience got a little bit more into the spirit of the panel than others: 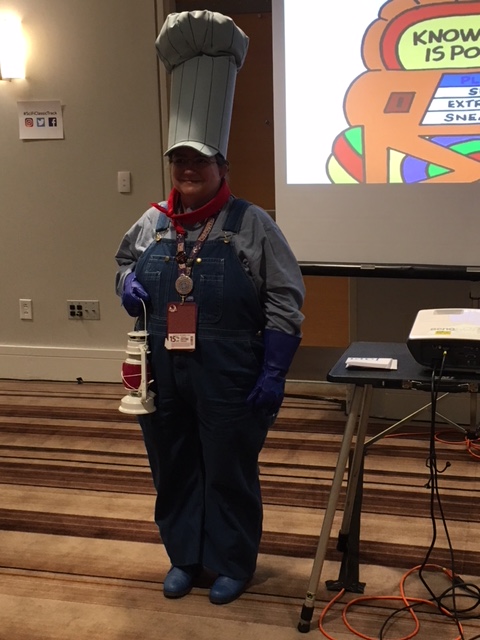 Sadly, I didn’t get many more photos of panels after this, though I attended plenty of memorable ones. The Diversity Track offered a discussion of “Lead Female Characters,” and the High Fantasy Track hosted a look at upcoming TV adaptations. (I couldn’t help regretting that most of the shows in the works — The Kingkiller Chronicles, The Witcher, The Wheel of Time — are based on books by male authors, with male heroes. But I did get a thrill when I learned of TNT’s planned adaptation of N.K. Jemisin’s The Broken Earth.) But the next panel whose image I preserved came the following morning, an examination of “Myths and Retellings in YA,” hosted by the Young Adult Track. 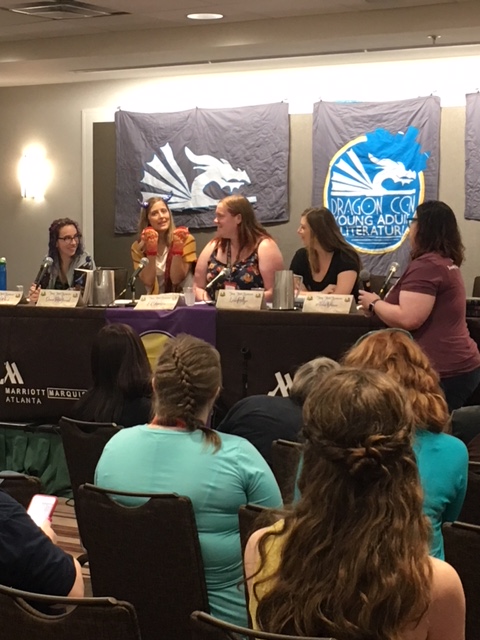 Left to right: Naomi Novik, Diana Peterfreund, E.K. Johnston, Lexa Hillyer, and Alexa Dunne. All the panelists made excellent points throughout, but I have to admit I was there to see Novik, because I was right in the midst of reading her Spinning Silver and swooning over its beauty. “I’m not interested in retellings,” she told us. “I’m interested in conversations.”

After the panel, Novik was gracious enough to render my copy of Spinning Silver something special for me to keep till I die: 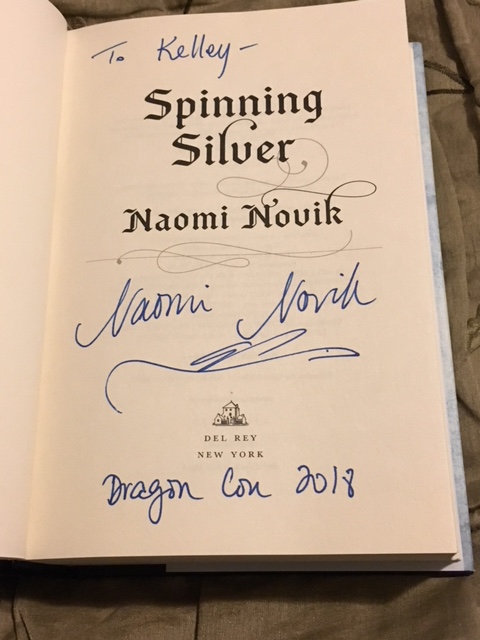 On Sunday and Monday, Matt and I spent some time at the ARTC sales table, helping to sell our CDs and also promoting my novels. Matt captured me in this environment: 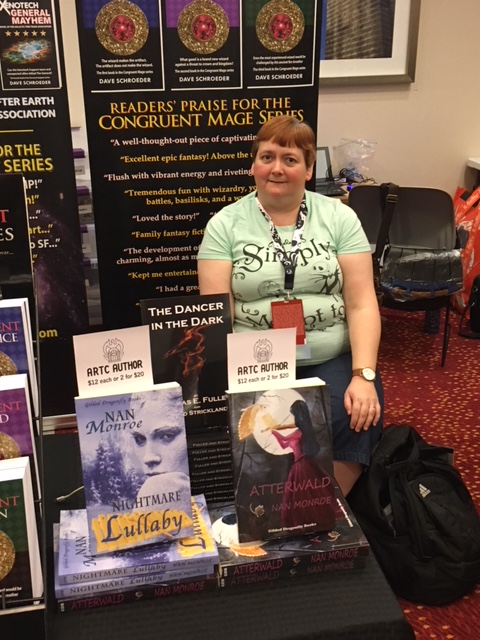 The ARTC sales table is near a platform where many of DragonCon’s musical guests perform. Not long before we left for home, we had a chance to hear a young woman named Erin Hill, whose beautiful voice is matched by her skill with the harp. She looks as if she’d just stepped out of one of the novel concepts I have yet to write, and if ever one of my stories were adapted for the screen, she’d be my ideal choice to do the soundtrack. 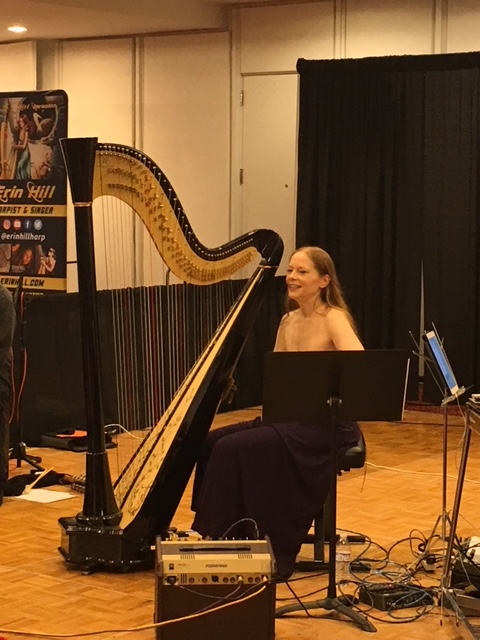 But every Con must come to an end. We departed with our usual resolution to return next year and learn and explore even more. And it did help keep the melancholy at bay when we knew who would be there to welcome us home: 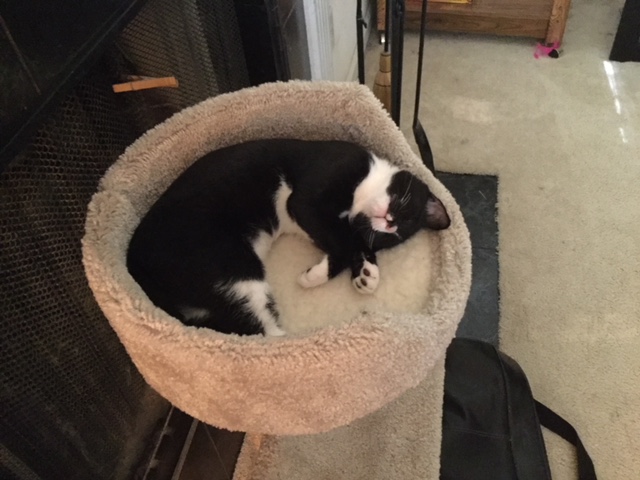 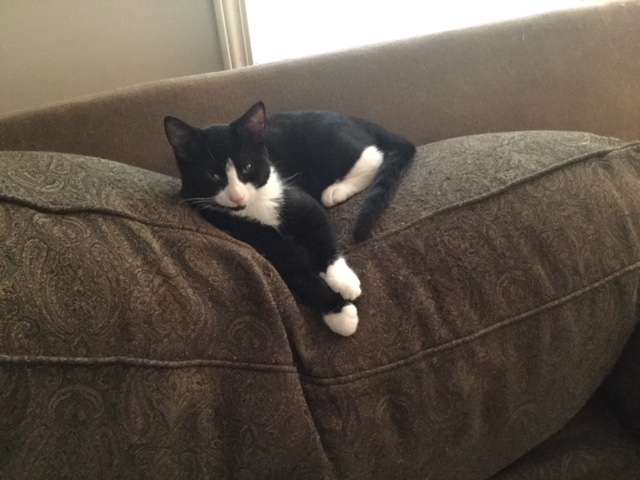